The Incredible Colours of Rajasthan

The Incredible Colours of Rajasthan

Originally a collection of states ruled by warrior princes known for their honour and bravery, Rajasthan has a rugged, mountainous south-eastern region and a north-western region that is largely desert.  This impressive landscape is dotted with ancient forts, palaces and cities that create an incredibly strong sense of its turbulent past.

Jaipur is the capital of Rajasthan and one of the most beautiful and vibrant cities in India.  The famous pink buildings were the brainchild of the Maharaja in 1876, who decreed that the city should be painted pink, the colour of hospitality, for a visit by Queen Victoria and the Prince of Wales.  Even today, by law, all new buildings must be the same colour.  It’s a fitting backdrop for this gracious and romantic city of art and culture, and for its particular shopping delights of jewellery and textiles.

As one of the ancient seats of the royal clans, there are many palaces, forts and temples in and around the city.  The 400-year old Amer Fort is a feast for the eyes with its rugged exterior and beautifully designed and decorated interior.  Also worth visiting are the royal City Palace, the magnificent Hawa Mahal, known as the Palace of the Winds, and the Water Palace of Jal Mahal.  One of the most photographed sites in Jaipur the restored palace appears to float in the surrounding lake and unknown to most has a further four-storeys below the water level. 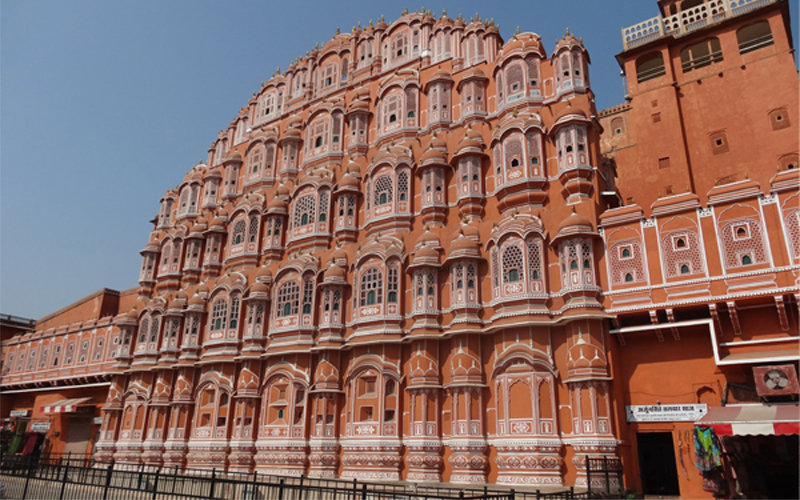 Jodhpur is the second largest city in Rajasthan and during medieval times was contained within a 10km long city wall.  In those days, the Brahmins (priests and scholars) painted their houses blue, giving the city its common name.  Nowadays the city and the colour blue extend far beyond the original boundaries, and the winding old streets are filled with the hustle and bustle of bazaars.  While you’re browsing, pick up some spices from a MV Spices shop, along with some centuries old recipes on how to create some local favourites.

Rising above the city since around 1460, Mehrangarh Fort was literally carved from the rock it stands on and the entrance is equipped with iron spikes to keep out war elephants during battle.  The original palace, inside the fort and intricately carved from sandstone, is now a museum which displays many of the aspects of Indian royal life.  For a more peaceful sense of history, visit the nearby Jaswant Thada memorial, another intricately carved structure, this time out of white marble, and treasure the beautiful views of the city and the fort. 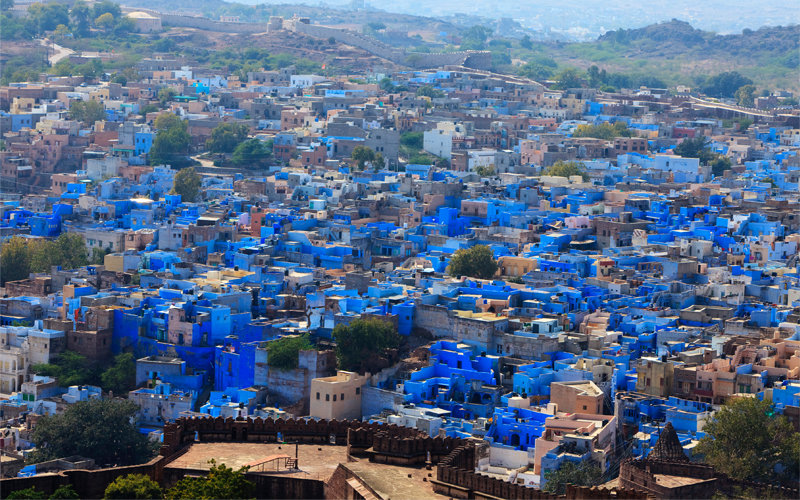 Named for the honey-gold sandstone it’s carved from, the desert city of Jaisalmer is the ideal place to get a sense of life on a camel-train trade route.  Revived only in the last 50 years or so as a tourist destination, it’s well worth a visit, although the camel ride is now optional.  The old city inside the massive 12th-century fort is a maze of medieval lanes filled with shops.  Look out for the beautiful silverwork and other local crafts.

While you’re exploring the fort town, be sure to see a ‘haveli’ or two.  These beautiful merchant houses are carved from the same sandstone as the fort, with one of the biggest being Patwa-ki-Haveli, built in the 1800s.  Also within the walls are seven Jain temples from the 12th to 15th century, which can be visited provided you remove your shoes and all leather items. For something different, a trip into the Desert National Park surrounding the city will give you a glimpse of how nature thrives in the Thar desert. 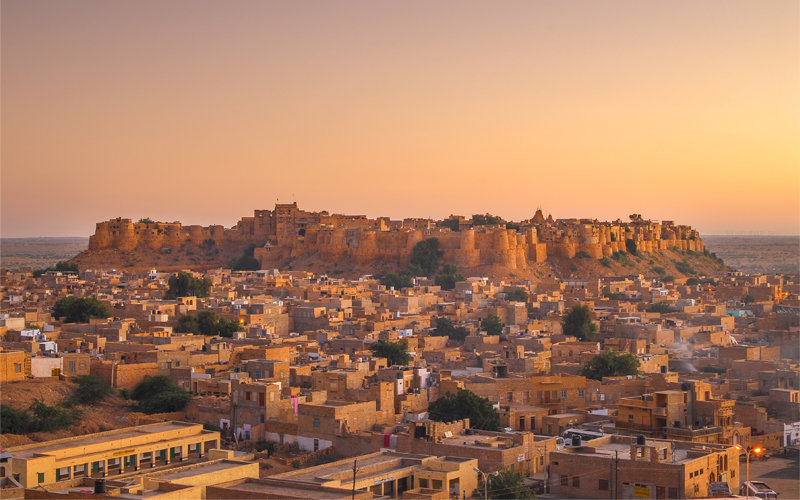 To experience some of the history of India first hand, Rajasthan is well worth a visit.  For more information, contact us on 020 7843 3531 or email us at info@clevelandcollection.co.uk.